As an ode to my Grandma Verna, I decided to go to St. Teresa of Avila (Price Hill/Covedale). Spent quite a few nights there, in my childhood, playing Bingo!!!

Let me just say that this is going to be hard to do – my purpose is not to put down or bash anyone’s Fish Fry. They’re all done in love and for a good cause! But, I do have a solid interest in figuring out who has just a really great Fish Fry.

I went with my sister, Tracey and my son, Mikey <–who stood no chance of eating fish. I had to pre-order a cheese pizza from Larosa’s for him, ahead of time! He is NOT an adventurous eater!

St. Teresa had a really great menu – salmon, oysters (!!!), shrimp, crabcakes (where’s Maddie when I need her?!?!) and of course, fried fish sandwiches! Sides included clam chowder, mac’n’cheese, hush puppies (I guess I should mention my great love for all things fried and crunchy here), fries and cole slaw.

So – I told you all that I was ordering fish sandwiches and let me just say, I REALLY wanted to order the salmon. But, I had to be fair. Boo.

Due to the fact that I can’t eat a lot (I’m sure I’ll address that at a later time), I had to stick to one thing. Hence, fish sandwich.

The people/helpers were so nice! We had a boy scout, physically lead us, to where we were supposed to park to Eat In. A volunteer chatted with us while we waited in line. And, the woman working the cash, was friendly and fast! We ordered our food ($5.50 with fish sandwich, hush puppies and can of mt. dew <–the boy), received a number and minutes later our food arrived. So quick!

It was simple – not bad. Bread, fish (I struggled with the square form), not greasy. I took a bite, sans tartar sauce, and it was flaky and tasted, like fish…I’m assuming Cod. I ran to get some tartar sauce. Okay, I must insert here that, according to my husband, I am a food snob. The tartar sauce came in a tub, with a pump = didn’t stand a chance. Lord, forgive me for that.

And, the beloved hush puppies…

…they were hush puppies.

And, the girl scouts – so damn cute. They were pushing their desserts – Tracey and I split a piece of non-homemade turtle cheesecake and Mikey succumbed to the cream stuffed chocolate cupcake. Um, hello, delicious fatness. 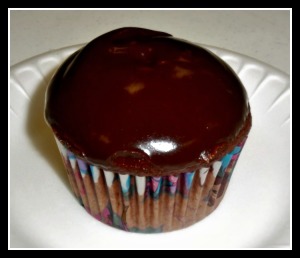 All in all, my score goes something like this…