Let me preface my review with this…the husband and I really aren’t hungry, hungry hippos. We had a restaurant.com GC and HAD to spend $35. Sounds easy, right? Well, at 915 Pub and Grill, we were struggling! <–which is a good problem because it means that prices are very reasonable! Plus, we planned to get boxes…to take leftovers home to the girl.

I loved the atmosphere of 915 Pub – it was small. Off the beaten path. Definitely a neighborhood hang out. It was a bar but there were many people (young, VERY old and in between) in there for just the food. We were greeted immediately when we walked in and you could tell that the owners/workers WANTED you there (which is always a plus, in my eyes!)

I’ve heard, via the foodie grapevine, that 915 has really great burgers. Being a lover of the burgers, I was IN. And, it’s never hard to convince the hubby of a new eatery – we are all about the dives and good grub! 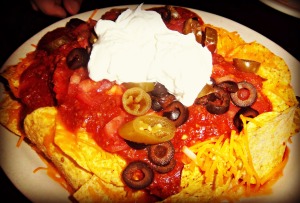 They were okay – not the best I’ve had but, being as they were nachos, I’ll eat them. What are they missing everyone? Yes, the guacamole!

I’d prefer flour tortilla chips (oh, and that’s CHILI, not salsa on top). My husband thought that they could have used less black olives and more jalapenos but I was okay with the black olives. (plus, the rumor is that black olive eating makes you sexy…I’m still waiting) The chili was okay – I would have liked some more spice but…again, I wouldn’t turn the nachos down. 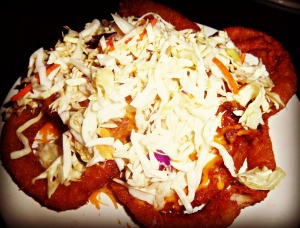 These were YUM. Different AND yum. The onion rings were good, by themselves – crispy, with the right batter. The cheese was melted. The pork bbq had a good shred and not an overly strong sauce. The cole slaw was really good – it wasn’t a traditional mayo/creamy slaw. It was like an Asian slaw, but without all the added “stuff”. They just used the Asian sauce. All in all, a perfect combo! I know that they sound weird and look like a hot mess but they were delicious. Hubby loved them, too! I’d totally go back for those!

Oh, my predictable husband – guess what he got? The BBQ Chicken Pizza – I shake my head at him. Seriously, if there is a BBQ Chicken Pizza on the menu, it’s getting ordered (by HIM!). And, our daughter is an enabler, because she shares that insane love of the BBQ chicken with him. It’s impossible to share with them sometimes.

So, here’s his BBQ Chicken Pizza!

I didn’t try it but…I like SHREDDED chicken versus chunks and the crust was too thick.

The husband said that he liked it (again, he’s never met a BBQ Chicken Pizza that he doesn’t like!) BUT…he would have preferred caramelized onions. In case you can’t see, it was BBQ sauce, LOTS of chicken chunks, tomatoes, onions, banana peppers (which he loved!) and cheese. I think he was secretly jealous of… 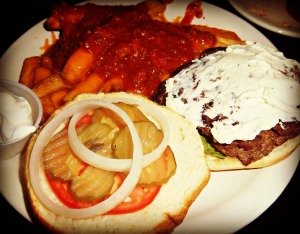 I got the Boursin Burger – 1/2 pound of Angus Chuck, with creamy garlic/herb Boursin. Mayo and all the fixings. I also added chili and cheese to my fries (so, we could reach the $35!)

Here’s another pic of it…cut open!

The bun was toasted perfectly – that, for me, totally made the burger. I love the crunch! The burger was a smidgen over-cooked but it was still really good. It was a “pure” burger – beef, maybe salt and pepper and grilled. In this burger, I liked it – it was the right amount of beef. Let’s face it, you can’t go wrong when you smear Boursin on ANYTHING but it gives burgers that creamy bonus that melts in your mouth! It had a teeny bit of mayo but I really didn’t need anything else – it was pretty darn good AS IS. The chili cheese fries were okay – they definitely did NOT skimp on the chili OR the cheese – my ONLY complaint is that the ranch was packaged, not homemade.

We both really liked our meals and REALLY liked the ambiance. Our server was really fantastic too – she was friendly, joked with us, chatted about the menu. Loved the “family” feel of 915! (THAT is priceless) We’ll definitely be back!

My advice – get out of your “comfort zone”. Explore new places and try new things!!!