Yes, I’m putting Frisch’s in the fast food category – I’m not trying to hear any crap about “upscale” Frischs’, okay?

I know a lot of people RAVE about the fish sandwich, from Frisch’s – the last time I had it, I can’t say I was impressed. I bit into it and grease squirted. Ick. But, I was willing to give it another go.

I got just the basic Cod fish sandwich – I want to say that it was around $4? I didn’t pay the bill, I don’t know. 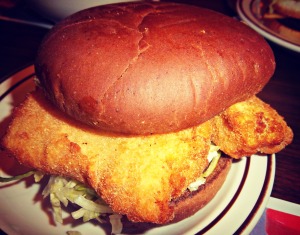 Oh, I got the rye bread, too. I make a fabulous old lady. 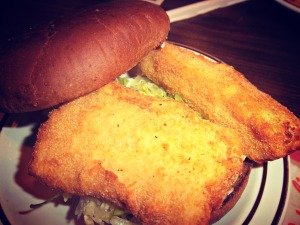 I will say, it was NOT greasy this time. The cod was flaky and I *might* have used extra tartar sauce. Maybe.

It was very good – probably my 2nd favorite fish sandwich (Wendy’s still has my 1st) for the fast food series!

I could use some more flavor in the batter/fish. But, I realize what crowd they’re catering to. It’s not the funky and young crowd.

I did take half home and the cod did NOT hold up. Much better the first time.