This feeling…I can’t even describe it. I’m not only BACK, but way blog backed up! I have no clue what the last thing I ate was but I’m going to do my best to cover everything, since my camera broke!

I had some of my pictures, stuck on the memory card, with no way to load – which is where THESE pics came from!

So – back to Don Pablos. When I was pregnant with Maddie (16 years ago!), I had a slight Don Pablos addiction. I, probably, went there, 4X a week – ordered a Veggie Fajita every damn time! I loved it. In my defense, back then, they were one of only a few Mexican restaurants. One of the first, really. Plus, just the smell of the FRESHLY made tortillas, sent me over the eating edge! I didn’t even care about the rest of the food, I just needed something to shove into those awesome tortillas.

I’ve been to Don Pablos, a few times, in the past couple of years. Honestly, I haven’t been very impressed. It tastes processed and, definitely not, fresh. Friends and I were meeting, for a girl’s night out dinner, so, thought I’d give DP (that’s my abbreviation for Don Pablos!), an official review.

I, of course, got a Sangria Swirlarita – those were still as yummy as usual! Of course, I have met very few margaritas that I don’t like.

The chips were okay – not salty enough. And, the salsa wasn’t very good. Again – I could get the same results from opening up a jar!

I ordered a Chicken Fajita because I really just wanted some yummy tortillas! 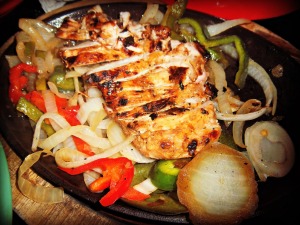 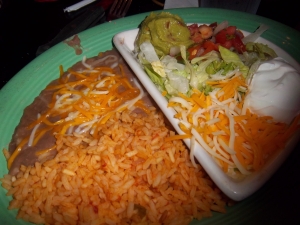 Looks promising, right? Well, not really. The chicken was tough and not very flavorful and the tortillas (which I realize that I didn’t take a pic of – again, camera issues!) were NOT homemade! Just the packaged kind, warmed. Seriously? What is it that the little man makes, in front of the tortilla press and why is he there? The ONLY thing DP had were the fresh, HOMEMADE tortillas!

I was pissed and not impressed. Blend all of this, with the fact that the past 3 times I’ve been there, it’s just been “eh”…Goodbye, DP!

So, no more Don Pablos, for me. Not when there are so many other delicious Mexican restaurants! They can keep their crappy tortillas.