This was our 3rd year, going to CincItalia, and I was just as excited, at the thought of eating yummy Italian food, as I was the 1st year! There’s always the Mexican versus Chinese food debate (I, typically, put people on one team or the other – I’m Mexican) but the universal love is, usually, Italian. I mean, garlicky, cheesy goodness? Does it get better than that?!?!?

We got there pretty early, on Adult Only night (again, some people can’t follow directions…) so the choices were WIDE open, to us! It did seem like there were less food booths this year? And, a lot of the same booths, had the same choices, so there wasn’t a lot of new action.

We always LOVE the St. C’s booth – they’re always fun and excited to be there. Plus, they have 2 of my favorite things! (The Italian sausage and pepper sandwich and fried oreos!)

Our first bite…(btw – keep in mind that there were 4 of us. So, we may appear to be pigs but we all shared – or, at least, that’s what I’m telling myself)

That was, definitely, the crowd favorite, from the past 2 years! And, still just as good, this year! (I smeared lots of mustard on it, too!)

First bite of the festival!

(yes, he loves it when I shove the camera in his face, mid-bite!) 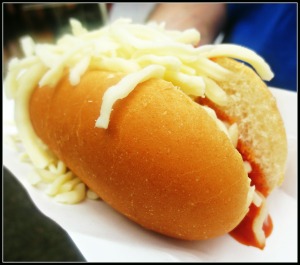 WE had this last year but our bestie couple got it this year! It was HIS (male bestie – have to protect his identity!) FAVORITE ITEM OF THE NIGHT! Yes, I made everyone tell me their favs!

We took a lap to see what we HAD to have – next stop was the Tambellini booth. Last year, they were, by far, the most popular booth.

This was Mike’s FAVORITE DISH OF THE NIGHT! Lots of cheese, inside the tender shells. The meatballs were nice and moist, too. The vodka sauce was delicious. We did, however, think that the booths need knives, for splitting purposes!

Our girl bestie and I, let the boys have at that one (I’ll get to what we were eating, at the time, next)

Great cheese amount. Personally, I don’t have a lot of interest in Chix Parm. The boys, however, devoured it, in seconds.

While the boys were taking down the hoagie, the girl and I stopped at, what I believe is a St. C’s booth, too. She got a white sauce pasta…

We tasted this last year, too. My bestie has an obsession with alfredo. 😉 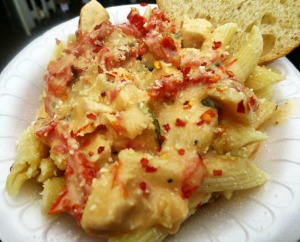 This was her FAVORITE DISH OF THE NIGHT!

It was very good. I’m not a fan of the sun-dried tomatoes…so, I just avoided them. We would have preferred a meatless version but the chicken was already mixed in. 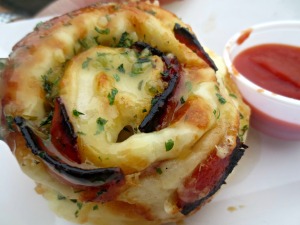 You could smell the awesome garlic, pouring off of this thing! It was filled with oozing cheese, pepperoni and tons and tons of garlic! It was MY FAVORITE DISH OF THE NIGHT! I know that Five Burroughs has awesome pizza (which, we never get to try here…) but they KILLED it, with the pizza wheel!

We made a pit stop, at the dessert table. The boys wanted some cannoli. I’m not a fan, so I let them have it. I, did, however, want to buy one of the Italian senior ladies. Words can’t even describe how adorable (and talented!) they all are. But, I think it’s frowned upon to buy another human. 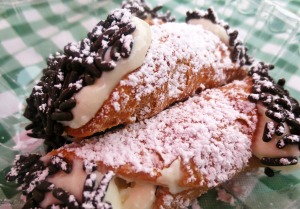 I think that was about 3 bites, for the boys.

I, however, got Tiramisu. No one else loved it, like I did. I’ll admit, it’s a very specific taste and you either love it or hate it.

Yep, minus a few bites, I took the whole thing down. Weight Watchers be damned!

We sat and chatted and, maybe, people watched. The west side is so good for that.

After a half hour breather, we were up and at ’em and playing some bars and bells. Then, the fried oreo booth called our names…

There are no words. This is probably ALL of our favs but, we had to choose a dinner entrée, as our favorite. If I could have a little man, that stood in my kitchen, and fried oreos, for me, all day long, I would. They are just perfect. It’s like a blend of funnel cake, with a chocolatey middle. It sounds so wrong to fry an oreo but really, it’s, oh, so, RIGHT!  Those bad boys didn’t stand a chance.

Then, the boys got a second wind. I don’t condone the next action but, I understand it. Pizza does have an allure (even if it is Larosa’s). Yep, they did the one thing that I threatened to break knee caps over…they ordered a piece of Larosa’s pizza.

Okay, even I have to admit, the pizza looked good. And, it NEVER (I repeat), NEVER, looks that good when you get it delivered!

I forgave them and let them continue a happy life, with knee caps, in tact.

While they were betraying me with the pizza, I went to the Dolce Vita Gelato booth. The guy working the booth was awesome and easy to chat with! I got some lemon sorbet – I mean, I had to cleanse my palate and all… 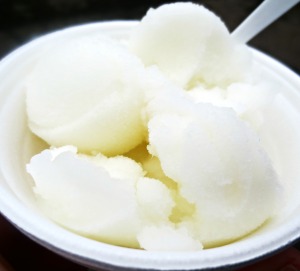 It was cool, refreshing and light. Very lemony, which I love! I am a huge fan of the gelato but really just wanted something with citrus.

And, that’s it. We rolled out of the festival. Full and happy.

I wish that they would have taken my suggestion and served lemoncellos, as a drink addition! But, alas, I can’t always get what I want. 😉

I think, for the most part, portion sizes were right on target, as were prices. The only booth that I think that needed to lessen sizes (and then, in turn, the prices) is the Tambellini booth. The portions were ungodly huge. At a festival that you want to sample everything, you don’t want to peg people down with 1 item.

We had a fabulous time and had great eating – if you’re out and about, on the west side (Harvest Home Park), today and tomorrow, stop by CincItalia! To me, it’s one of the things that makes the west side unique. And, if you get something different, than the items above, take a pic and send it to me! I’ll post them here!

Guess what I get tonight? NADA! Could this weekend get any better, eating wise?!?!?